“Nature cures the disease…while the healer amuses the patient.”

I find it funny when some white people are ready to fly across the world in search of an “indigenous” experience. Staying with that racist prejudice, a rebour travelers will dismiss the idea of considering an experience with a shaman who has a background in the same culture as theirs and could serve as excellent bridge into another. This story is about such a man. His name is Ronald Wheelock and he has been called a “gringo shaman,” a name he likes to use himself. I drank with him in his centre called El Purguero, shared many laughs and took some shots you can see here: 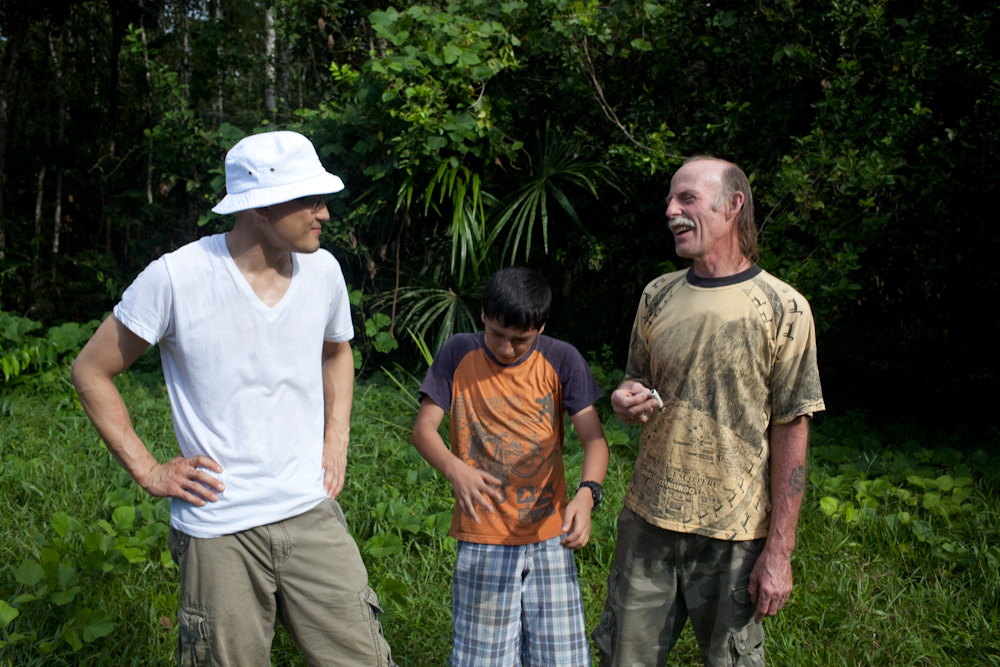 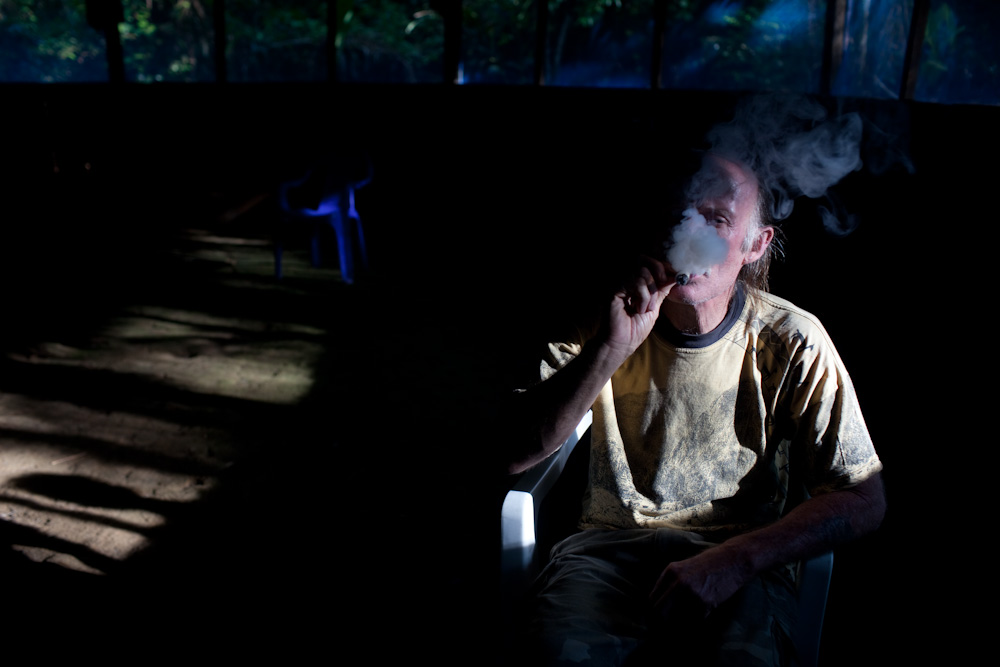 Ron is a very interesting character, one of those that shine when you meet them on your path and will not leave you unaffected. I grew up with comic books and adventure movies and I have a sense for larger-than-life figures, for people who ride on their path laughing in the face of adversity, despite missing teeth, and others who say “you can’t make it.” Ron went to prison for his ganja growing in the US. He went through weird family business, this and that, but he is alive, big style. I have only spent short time with him, so it may be strange to pay such homage, but sometimes things are quite clear. 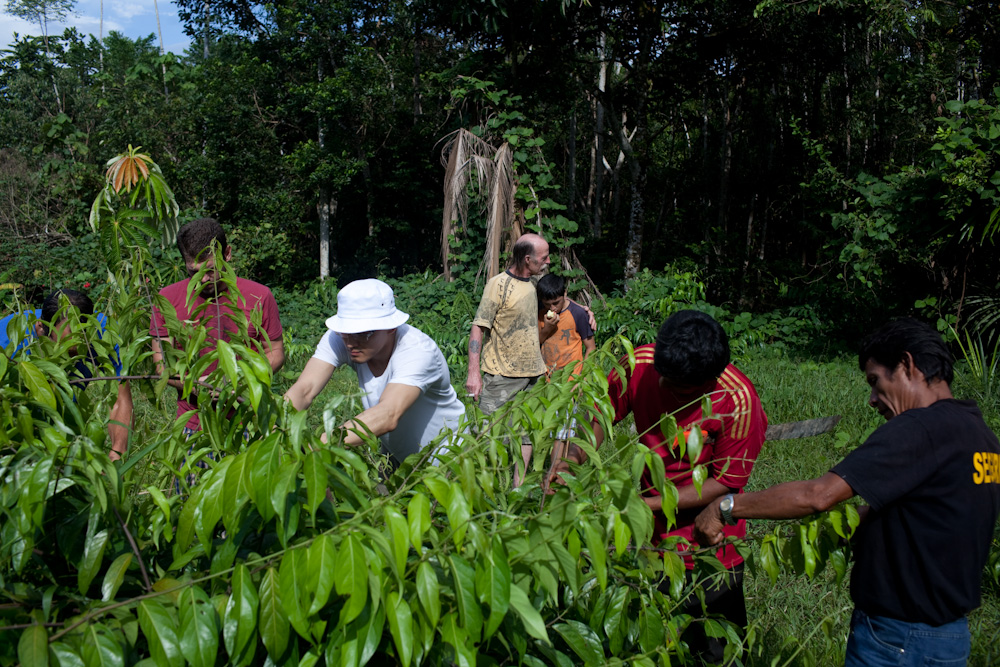 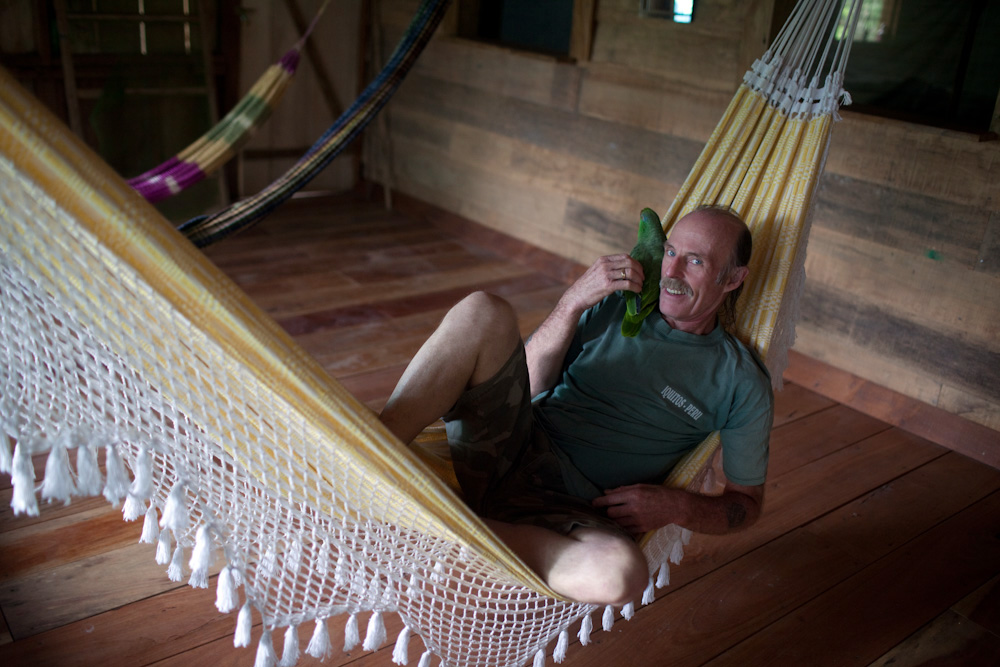 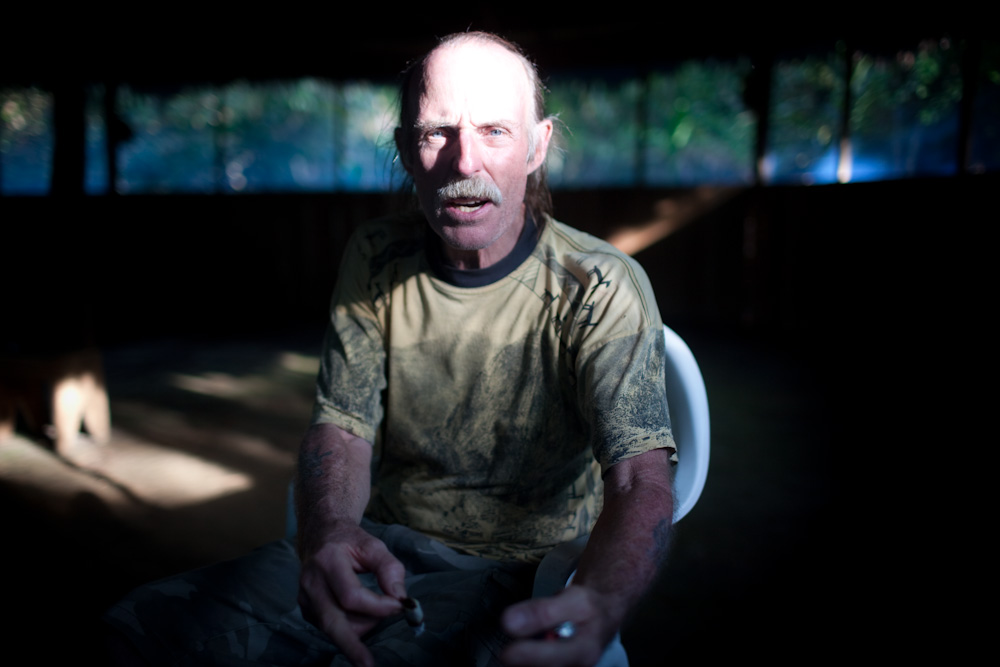 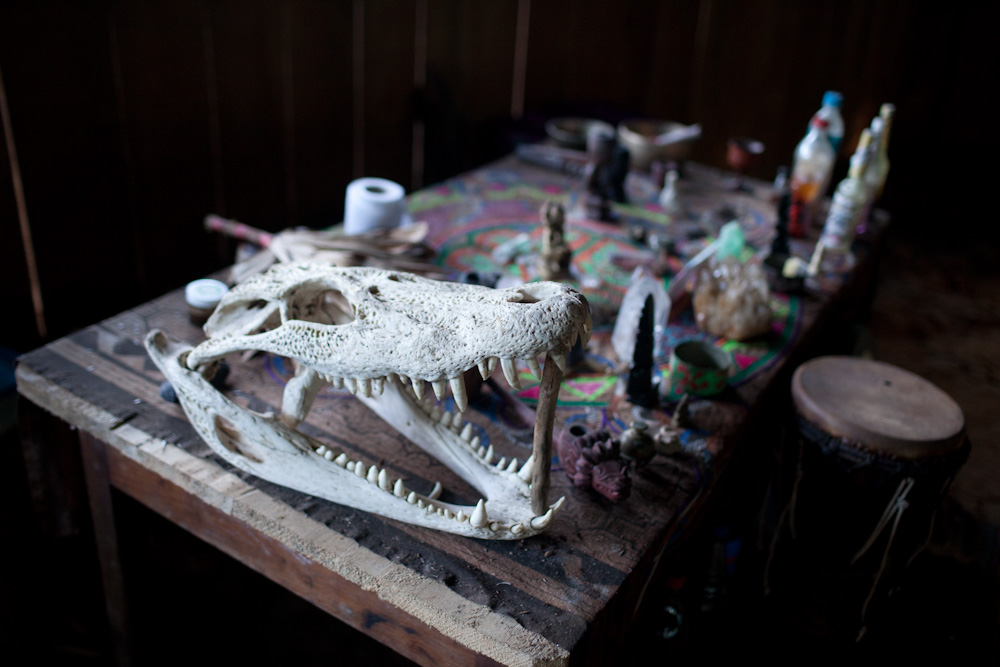 The word gringo is used in Latin America for any white foreigner, but in case of Ron, with his Southern redneck accent, it fits really well. I could easily imagine him sitting back somewhere in Alabama on a porch with a banjo, cursing “assholes in the federal government.” 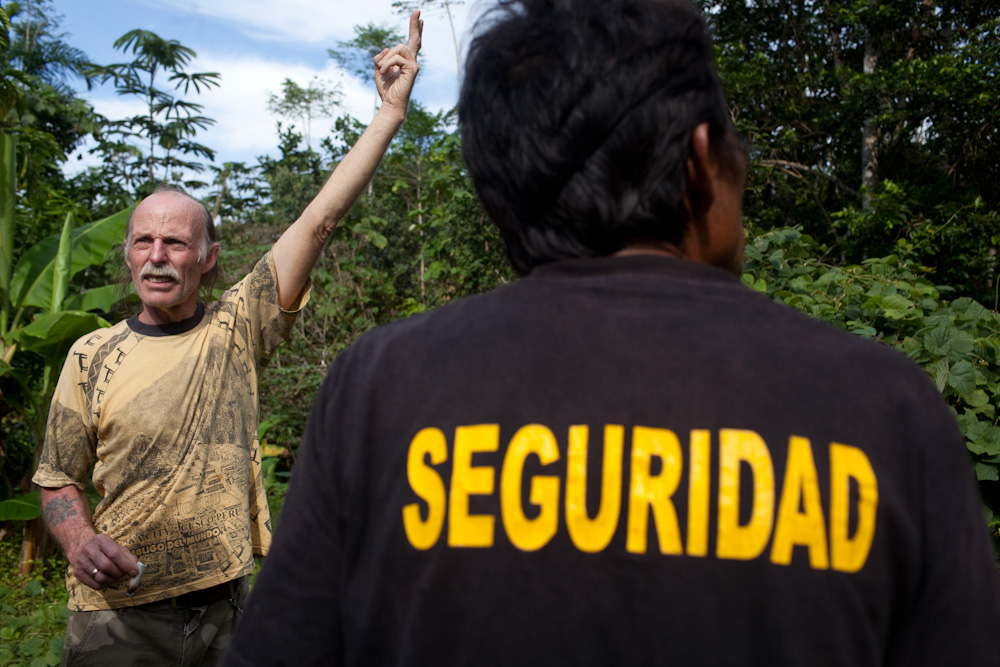 He has nothing of an archetypical redneck’s closed mind however. I guess this is not surprising after his many years of working with medicine, first cannabis and afterwards ayahuasca. He is very open minded. I found it a nice break to chat with him, after a series of encounters with indigenous curanderos and their traditional worldview. Ron is a great storyteller and in many years in this field he has harvested stories to spin that may leave many disbelieving –– like the one about his journey with a black panther into the uterus of an old patient, where the panther ripped apart an old witch representing cancer, and the woman was cured!

During the days people spend at his place they get to hear many of these, as well as more practical information about medicinal herbs, their cultivation, harvesting and usage. They will get to learn how to prepare their own ayahuasca, and later drink it during the final session of the retreat. 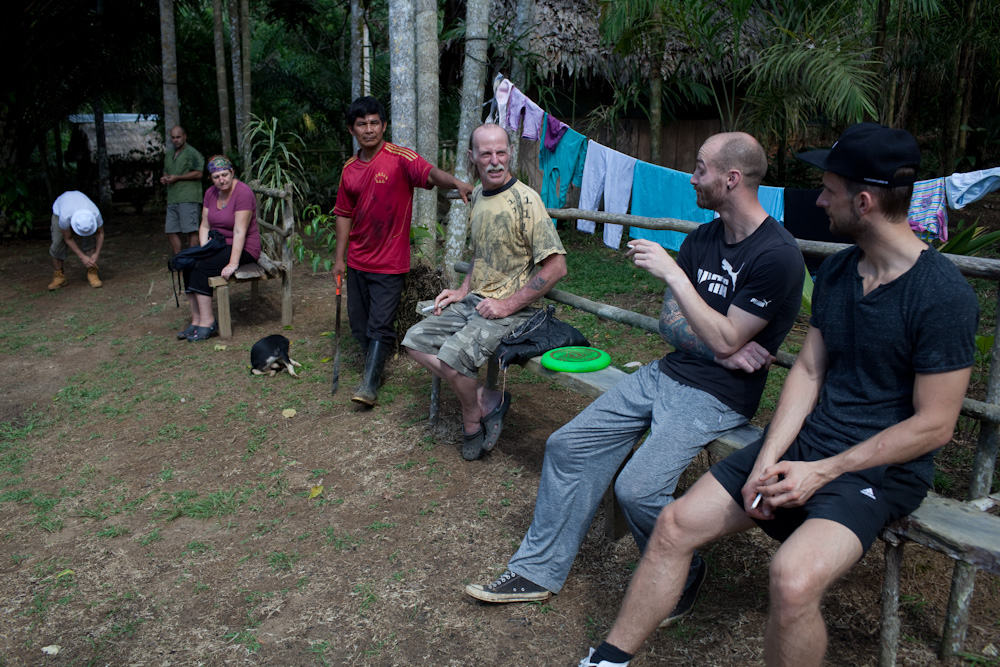 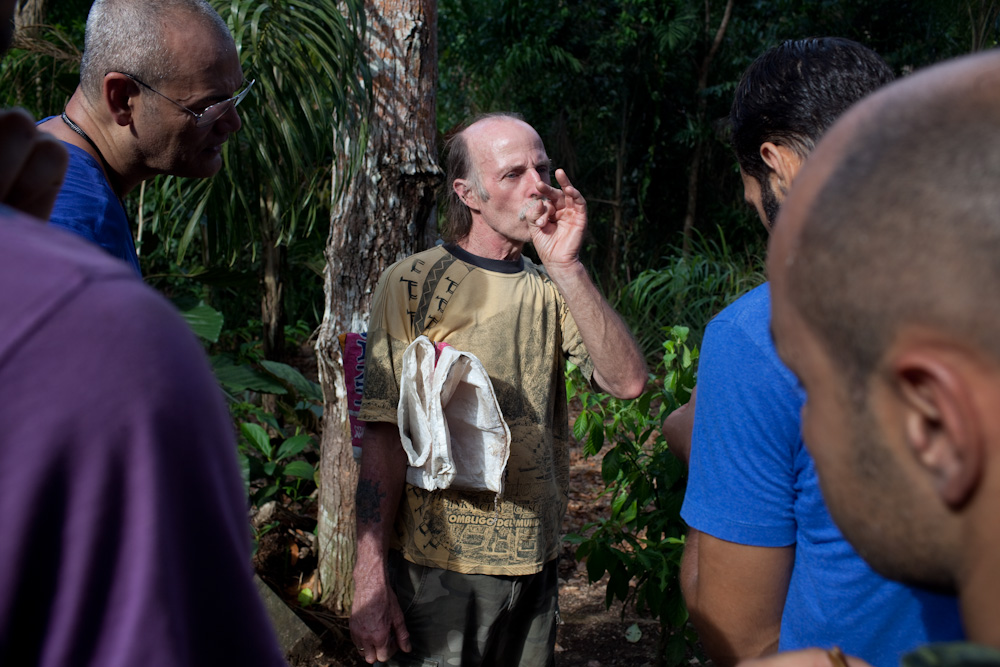 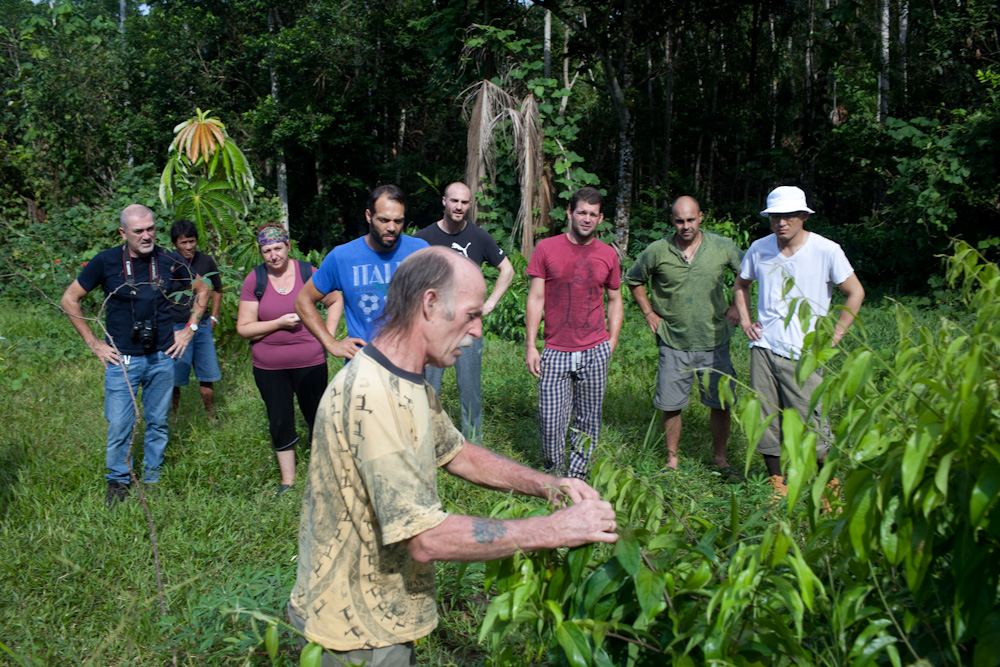 Plants are his allies and companions… His relationship with cannabis is very long, though not as passionate now as it was before when he was back in the states. “With her (Ganja), you will stay happy where you are; with me you will grow,” Mother Ayahuasca told Ron, and he realized it makes sense. But the brew of the vine is not the only thing Ron works with. He has a lot of experience with mushrooms as well as many local healing plants. Being under constant threat of brujeria –– “black” magic (there are many brujos here jealous about this success) he made friends, as is apparent in these photos, with tobacco, a powerful protector. 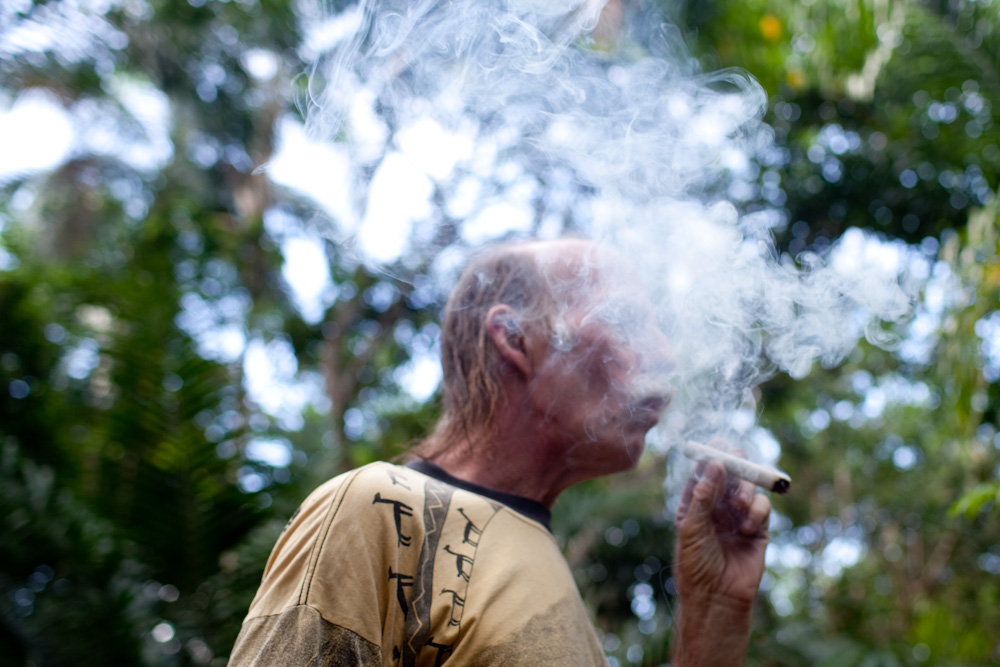 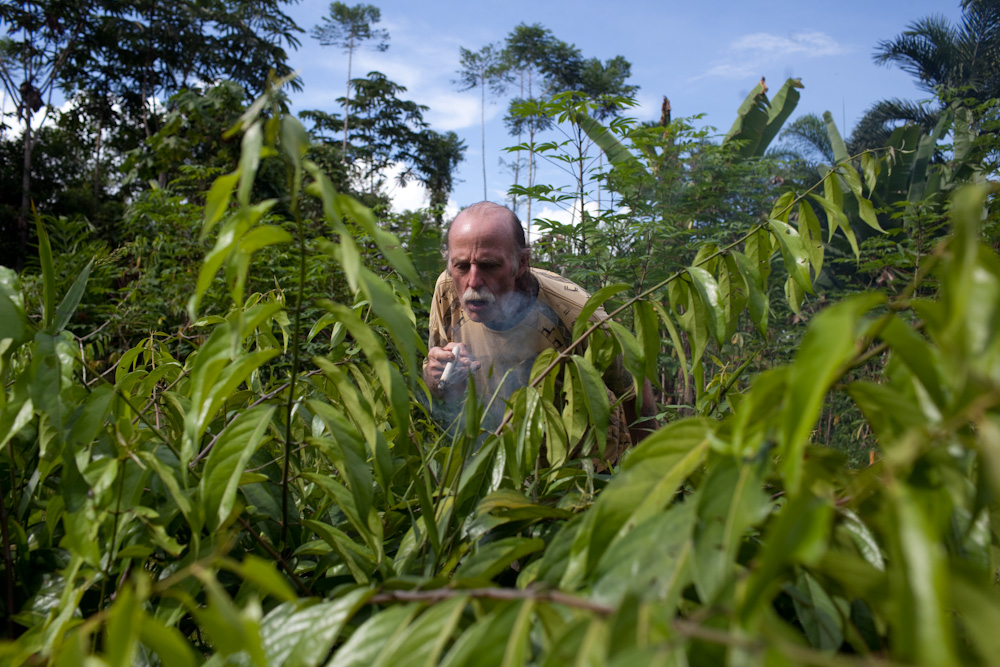 It was a pleasure to get high and stroll around the grounds of El Purguero, getting to know both the plants and the people, like Ron’s young stepson and assistant Quetzal or the other guests. Prices here are not so steep as those at other lodges (although they’re still steep for me, which is why this is the first place of this kind I’ve visited), so it attracts a younger crowd, people on a budget who are for the most part English speaking. The retreats, described in detail on the El Purguero website, last 12 days and include four main ceremonies as well as all bonuses such as San Pedro. 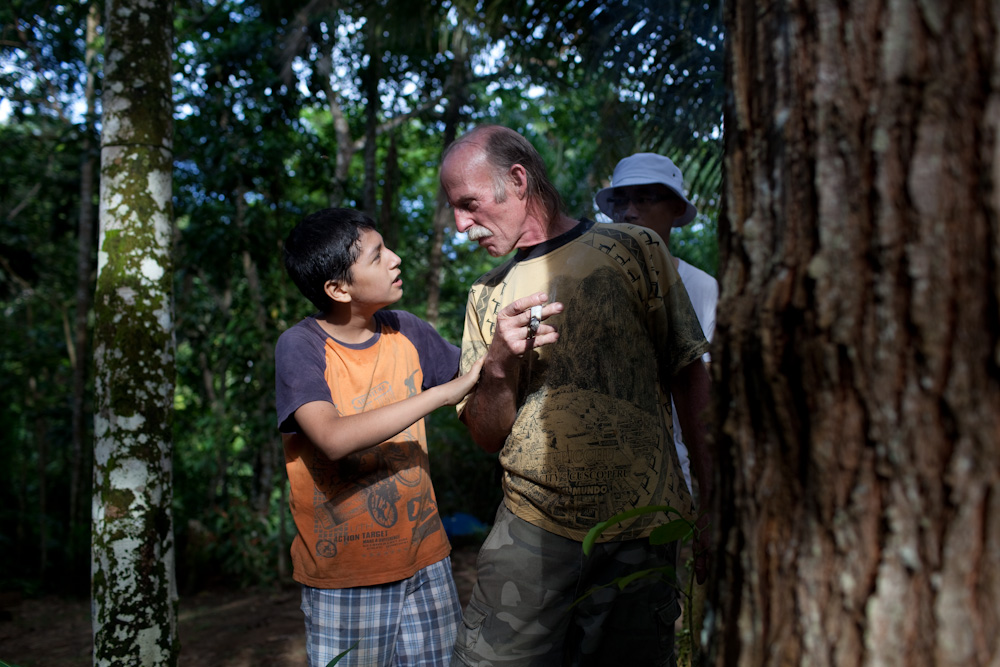 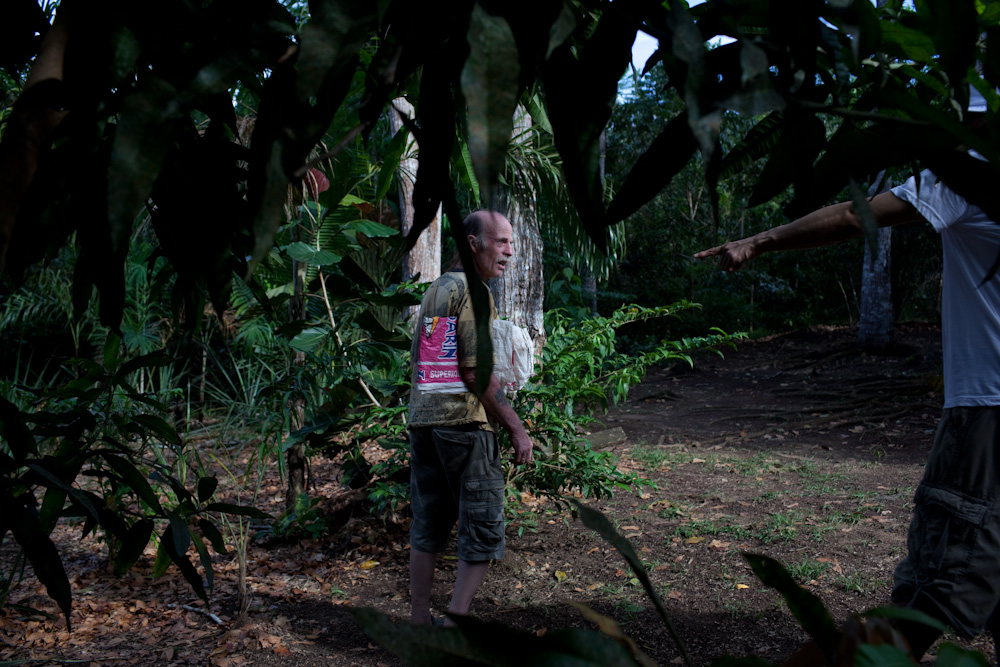 The night ceremony starts here quite early, around 8pm. There is no reason to wait until later, as the area is quiet enough, without barking dogs and loud sound systems.

First, the area must be purified and safe. This is job done with tobacco. 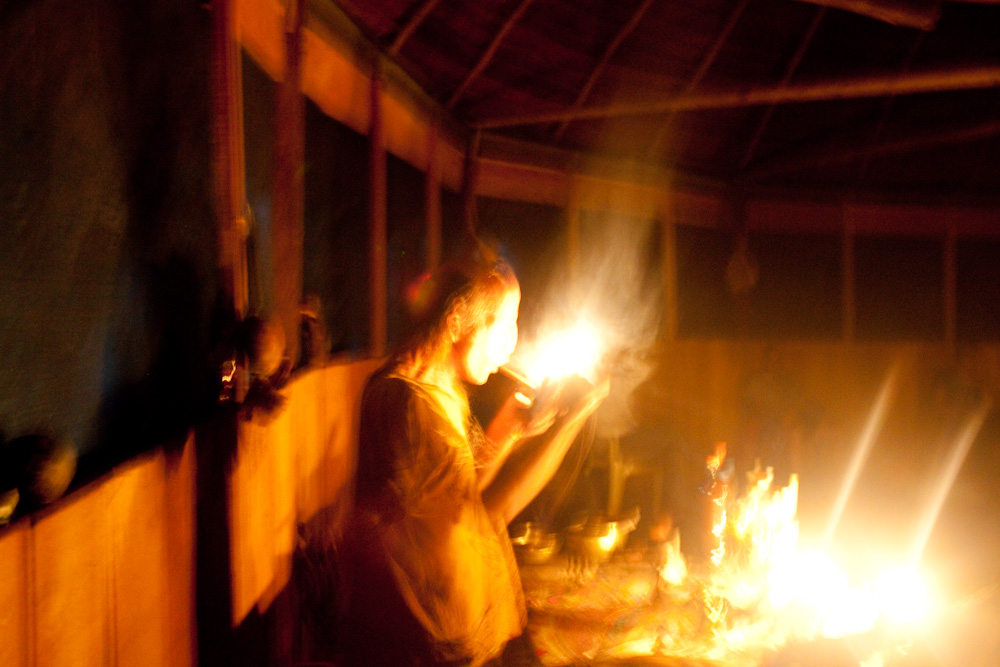 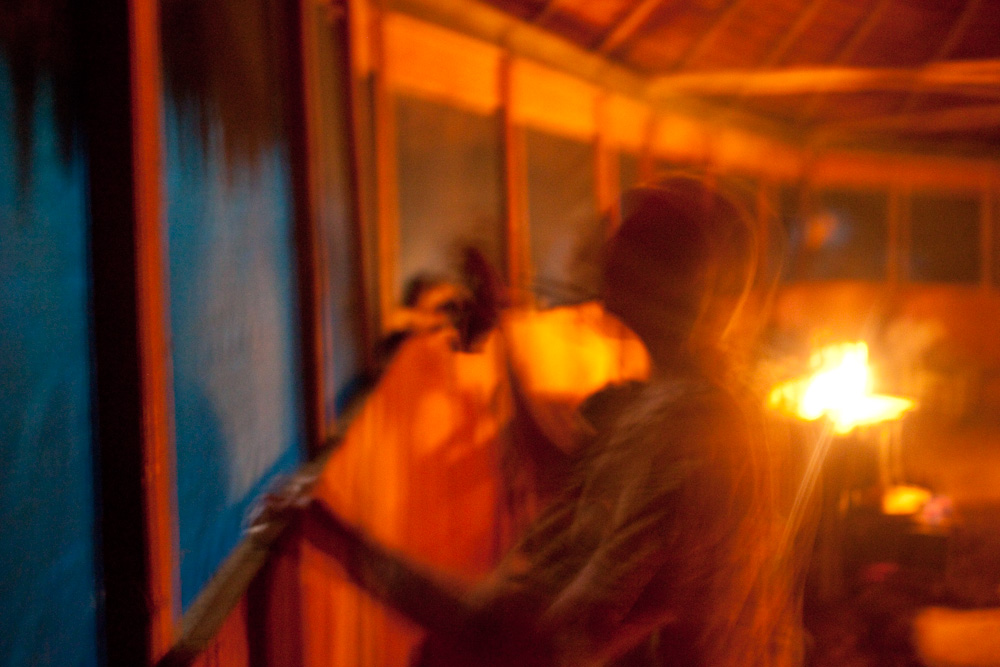 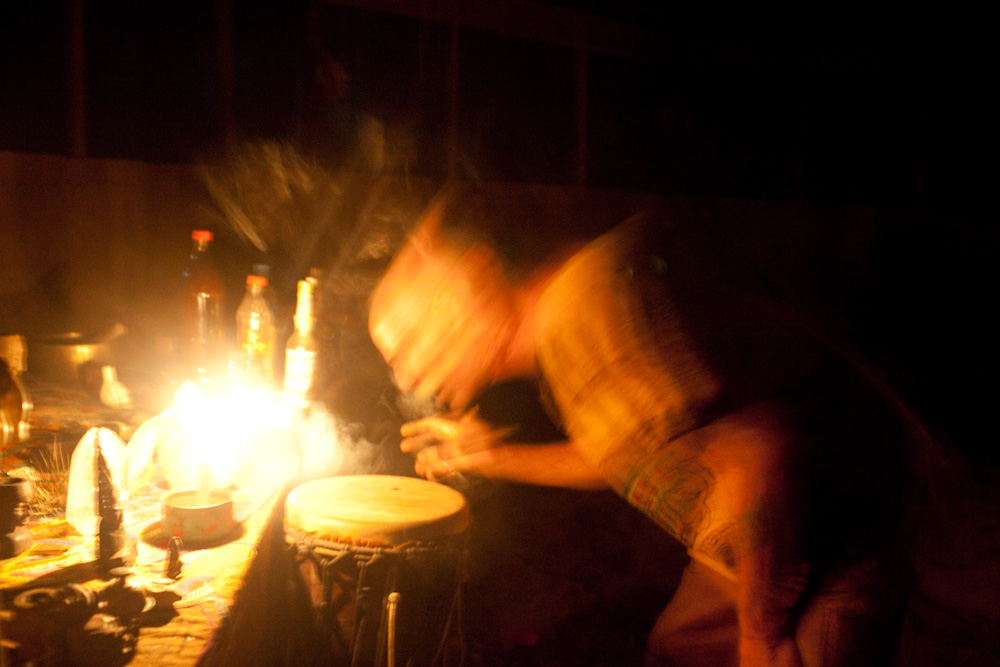 People are sitting in chairs spaced around a large maloca. Ron encourages active and present participation. Of course one can lay down on the floor, but there are no comfy mattresses here in which you can drift into a dreamlike state. One comes here to work, and the place is being prepared for serious work. When, in the middle of ceremony, Ron starts banging on his huge gong, I think I am going crazy, as he goes on and on, and gets more and more violent. He later admits he had visions of his three Harley-Davidson bikes, and was riding in full gory during this nightmare metallic cacophony. But even when I want it to stop, I strangely enjoy it, and know the purpose: the purpose is to have a change, a flow of different states, as becomes apparent when silence returns.

We are about to start, these are last moments with any of the light so I shoot like a Blackwater mercenary, everything that moves. Ron is purifying himself now, blowing protective tobacco in his chest.

Now what remains is chanting the icaros into the bottle with ayahuasca, which is almost ready to be served, and to give thanks to God, any way you understand him/her/it, asking for guidance and a good ride tonight. 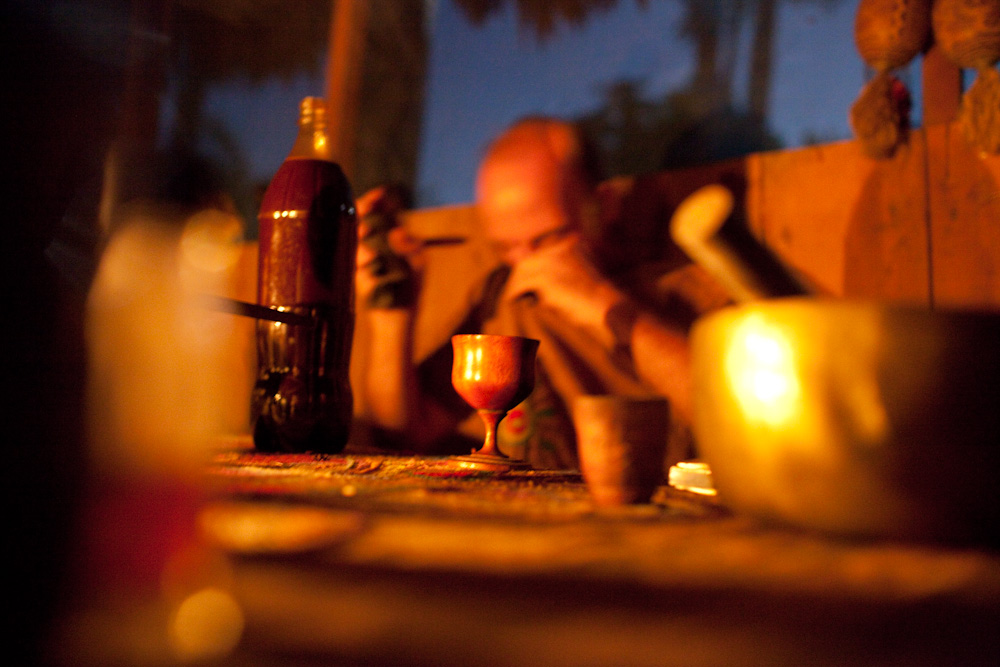 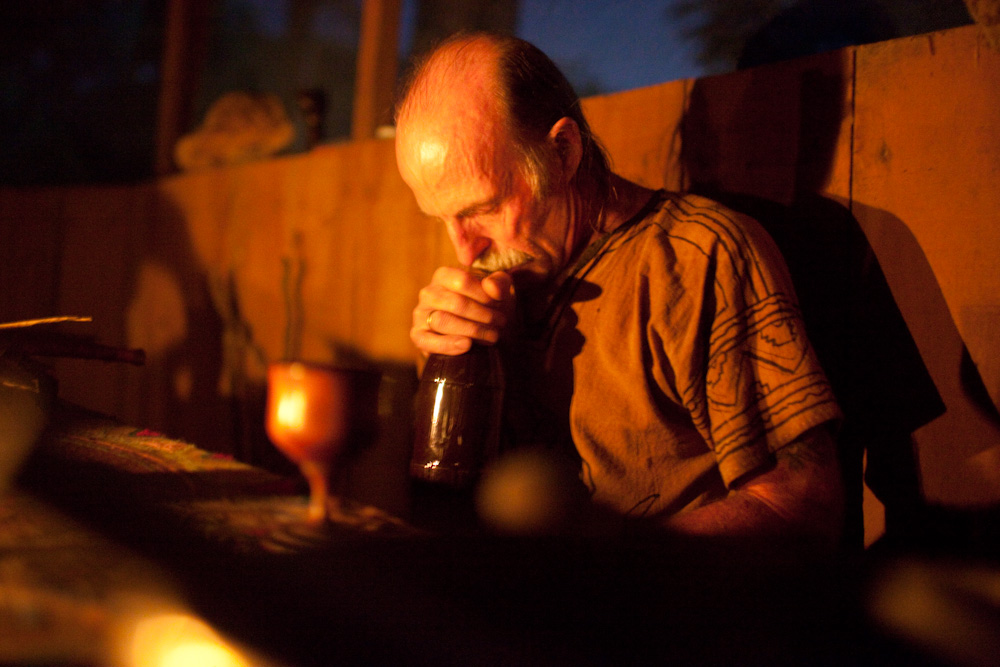 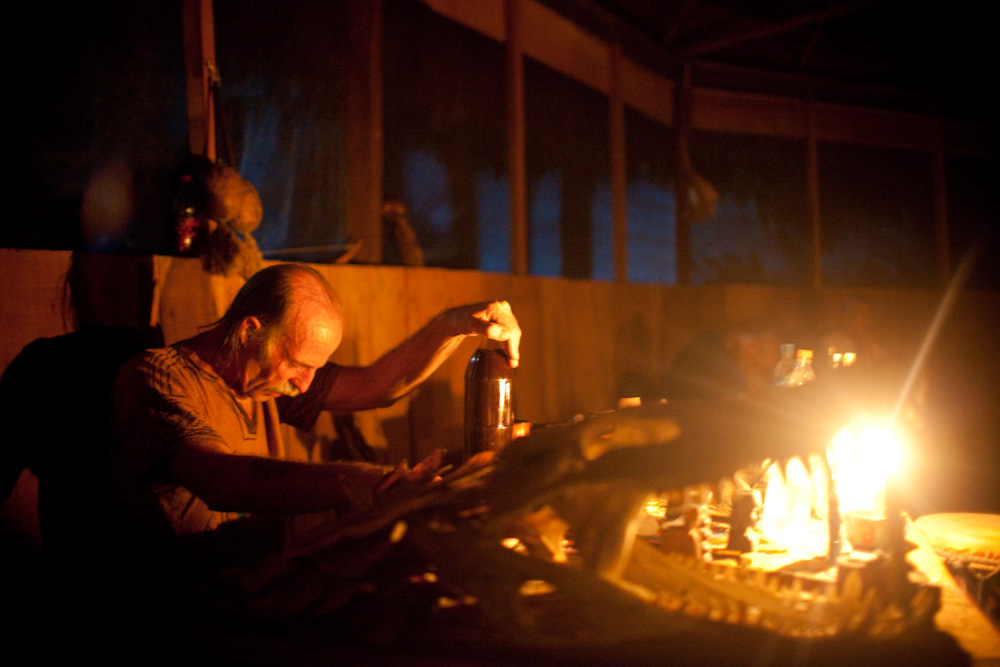 Well, the time is now. This is beginning of the retreat, our first ceremony, so some guys are quite nervous. But we have been chatting a lot. This may be largest adventure of their lives, so why wait and worry? 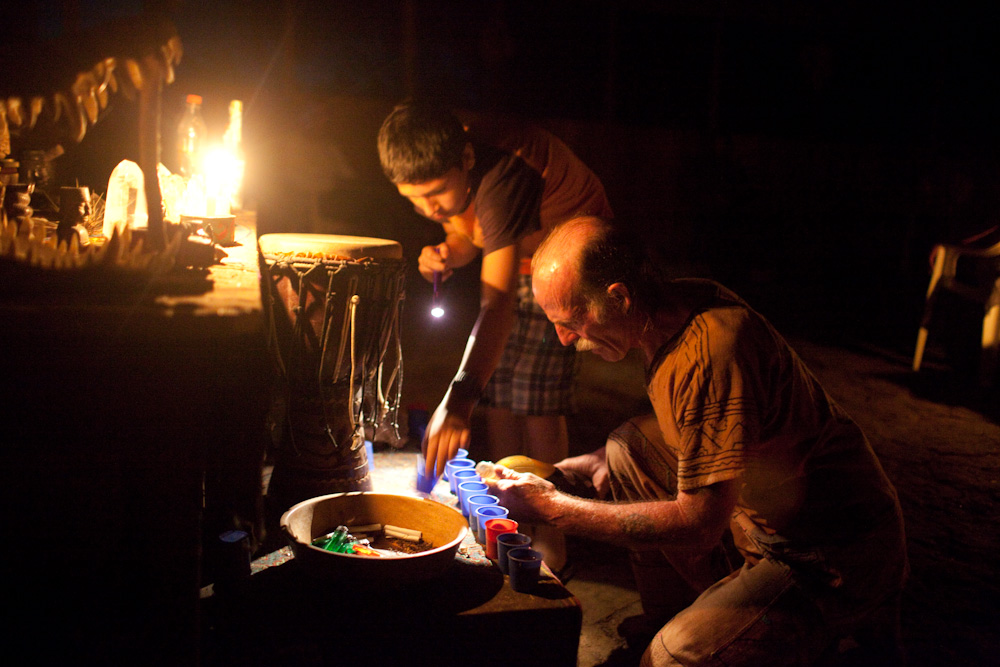 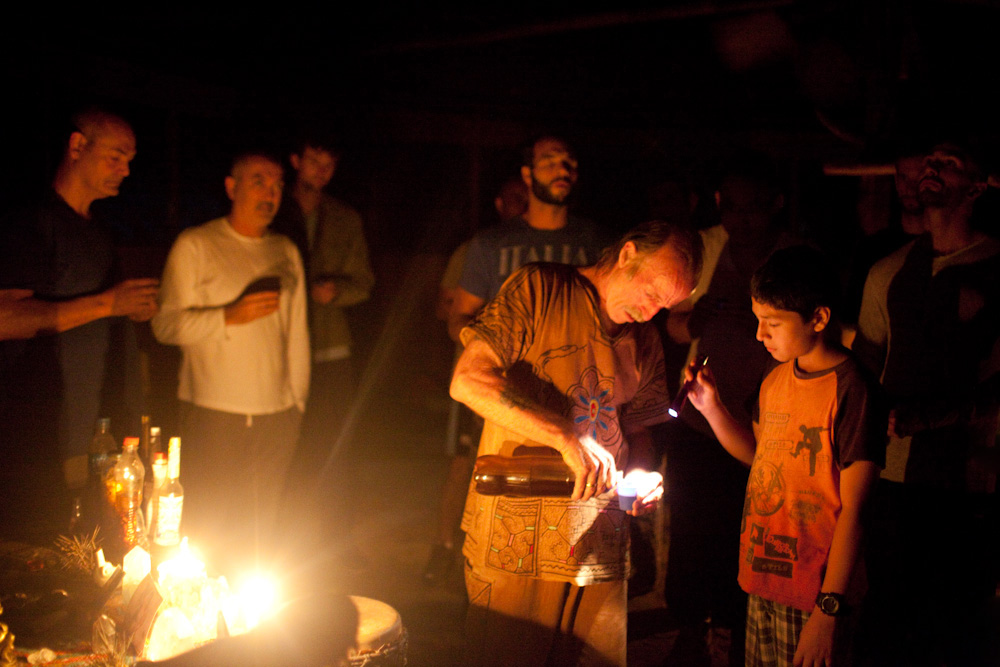 The candles go out, the darkness reigns. All that is now, and all that is the most interesting, is not visible to my camera.

Ron begins to sing, and for a long time it actually disturbs me. I find it too ethnic, too artificial, not fitting his character at all, not “his.” As the night progresses, and icaros evolve –– becoming wilder, more improvised, less designed –– I sense the reason for the problem. It is quite opposite: in the first part of the session, songs were “his” too much, out of the mind and memory. Now, when the medicine begins to take over, they are channeled through him and magic begins.

He is tireless, hardly ever stops, goes from drum to singing, from singing to gong, shrieking and growling. I hear wounded and angry animals, I hear bass monsters and high pitched spirits of the canopy. There are long periods when it sounds as if Ron was vomiting a whole array of primordial sounds, and the animals keep evolving and transforming, materializing out of his voice only.

The maloca is very spacious and I feel spacious in my head, I feel fresh and alert, like a primitive hunter on the lookout for what can be enountered in this vast forest of the interior. It feels like the session lasts all night but it is only midnight when we say goodbye to all the guests and climb into Ron’s pick-up to drive some 20 kilometers to his home. We share many jokes and stories in his kitchen, as if nothing has happened. But it did. It was a good session and I am very happy to have come here.

Read the rest of this essay, and view more photographs at: blog.swiatoslaw.com.